Magnesium – the valuable ally of the human body

Magnesium is an element that is abundant in nature.

It is the 9th most abundant element in the universe, the 8th in the earth’s crust and the 3rd in the sea.

It takes its name from Magnesia in Thessaly. The Romans called it Magnesia alba because of the white color of the carbonates found in the prefecture of Magnesia.

It was first isolated in 1808 by Sir Humphry Davy and in the 19th century it was used as an antacid, laxative and as an antidote to poisons.

It is the central atom in the chlorophyll molecule, a complex chemical compound that gives plants their green color and plays an important role in the process of photosynthesis and therefore in plant survival.

The biological action of magnesium is due to its ability to make chelating compounds (very stable compounds formed between metallic elements such as magnesium, iron, etc. and organic compounds such as hemoglobin, chlorophyll, adenosine triphosphonate-ATP, etc.), but also to counteract the action of calcium.

Magnesium participates as a cofactor in more than 300 chemical reactions such as the binding of hormones (insulin, thyroxine, testosterone, etc.) to the receptor and the expression of their biological action, the signal transduction of neurotransmitters (dopamine, catecholamine’s, serotonin, GABA, etc.) and the expression of their biological action. etc.), synthesis of nucleic acids and proteins, carbohydrate and fat metabolism, muscle contraction, neuronal activity, vasomotor tone, calcium binding to its channels.

More generally, magnesium plays an essential role in the regulation of the body’s energy, the functioning of the nervous and muscular systems and bone health and is considered to be the natural calcium antagonist.

Magnesium is not produced by the body, but is taken in from food.

Daily magnesium requirements are related to gender, age and various physiological conditions such as pregnancy and breastfeeding. Women during this period of their lives have increased needs.

The recommended dietary intake of magnesium, according to the National Institute of Health as well as the Food & Nutrition Board is:

Magnesium is abundant in all foods except fats. Large amounts of magnesium are found in all green leafy vegetables since magnesium is a component of chlorophyll, as well as in whole grains, cereals, nuts and water. Smaller amounts are found in chocolate, fruit, meat and fish and dairy products.

Foods rich in magnesium according to the National Institute of Health are : 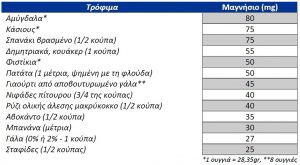 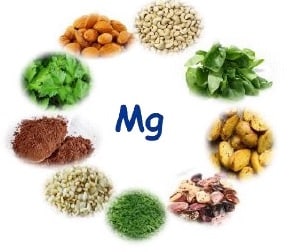 Dietary magnesium is absorbed in the intestine, mainly in the intestine and ileum, and its absorption rate varies between 11-65%. Vitamin D and parathyroid hormone have a positive effect on absorption, while calcium, phosphorus and high-fat diets reduce absorption.

The kidney is a major regulator of magnesium in the body, having the ability to excrete up to 100% of the ion in cases of excess.

Factors that can affect magnesium levels in the body are:

In the last century, a progressive decrease in the daily intake of magnesium has been observed, resulting in a lower intake than required and a more frequent deficiency than expected.

The most common causes of magnesium deficiency are:

Magnesium deficiency can be manifested by:

Magnesium deficiency can be treated with magnesium supplements in which magnesium is available as magnesium oxide, magnesium chloride, magnesium citrate, magnesium aspartate or magnesium pindoleate. Magnesium preparations are well tolerated but may cause gastrointestinal disturbances, particularly diarrhea. Their administration may interfere with the absorption of certain preparations such as bisphosphonates, calcium antagonists, etc.

Sucrosomal magnesium (UltraMag® Oro) is a new magnesium formulation that uses sucrosomal technology to transport and deliver magnesium to the body.

The absence of side effects combined with high efficacy and easy administration make the product user-friendly.

It is available in sachets containing granules which dissolve directly in the mouth and do not require water.

It has a pleasant taste.

Hypermagnesaemia is rare and may be observed when there is impairment of renal function with concomitant intake of laxatives or antacids containing magnesium or in pregnant women after intravenous administration.

Magnesium due to its biological role offers significant benefits:

Food supplements should not be used as a substitute for a balanced diet. This product is not intended for the prevention, treatment or cure of human disease. Consult a doctor if you are pregnant, breast-feeding, under medication or have health problems. Keep out of the reach of young children. Do not exceed the recommended daily dose.